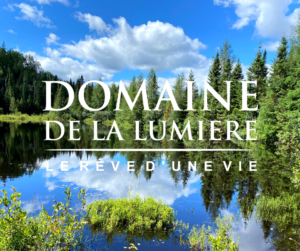 Living in your own playground: that’s the lifestyle that awaits you at Domaine de la lumière!
Whether you want to spend time as a couple, with family or friends, fill your needs by setting up your new nest on one of the 60 available lots!

Participate in the Open House:
August 27th and 28th
From 1pm to 4pm
At 1727 Piché Street, Sainte-Agathe-des-Monts

They are waiting for you; nestled in the heart of the Laurentians, on a mountainside, surrounded by two lakes, as well as hiking, biking, snowshoeing and cross-country skiing trails!

Explore the environment that could become yours, during guided tours by the promoters of this housing project of which we are proud partners. Kill two birds with one stone and reserve your lot the same day! Details and conditions on site. 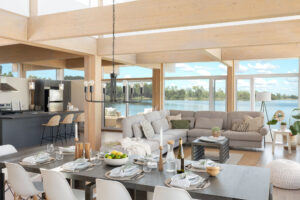 We couldn’t think of a better collaboration!

We are proud to introduce Transformer Table, whose products will be featured exclusively in some of our model homes across Quebec and Ontario!
The first items have been installed in our Natur-L models at our Beloeil Head Office! Stay tuned for upcoming installations!
Photo credit: Mélanie b. photo 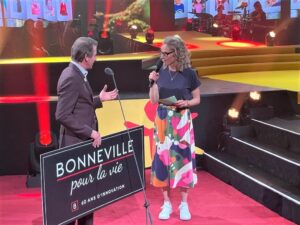 51,500 thanks to all those who have purchased a ticket to win the Maison Enfant Soleil designed by Bonneville 2022, Loukian, since its launch at the end of February! Another special thank you to our employees who went above and beyond to make the sale!

Whether it was at one of our branches, at the Home Shows or on our website, your purchase made the difference in the amount we revealed during the 35th Telethon broadcast yesterday! A record collection of more than $20M was even announced at the end of this great televised event of solidarity with sick children in Quebec and their families!

Our co-president Dany Bonneville was there live to highlight their courage. He also explained the importance of our involvement with the organization, notably by being the proud builder of the Maison Enfant Soleil for an 8th consecutive year, the 2nd largest fundraiser after the telethon!

Mr. Bonneville even sits on the OES Board of Directors, in addition to having been the originator of the Entreprise Enfant Soleil certification!
There is still time to buy a ticket to give back! The draw will take place on July 21st.

Your own piece of paradise in the beauty of the wilderness, close to urban centers, that’s what Domaine Poisson Blanc offers!

Located at the entrance of Lac Sainte-Marie in the magnificent Laurentian region, this new housing project offers several residential lots with areas of more or less 1 acre.

Discover now what your future lifestyle has in store for you!

EVERYTHING YOU NEED TO KNOW BEFORE BUYING A MANUFACTURED HOME! - May 21st, 2022 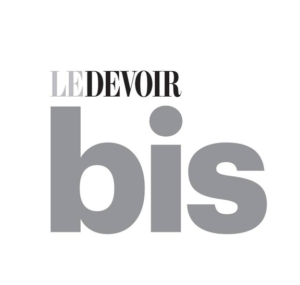 Custom designing the environment that will become the scene of all your future memories is our passion!
After more than 60 years of innovation, our main objective remains to guide you smoothly towards the lifestyle you want to adopt!

“From model selection to customizing living spaces and choosing finishes, every step of the property design process takes place in one place, with the support of the same team.”

This week marks the first ever Thematic Week for Diversity and Inclusion of Women in the Construction Industry, organized by ELLES de la construction.  For the occasion, inspiring women from our team sat down with Myriam St-Pierre, Executive Director of the group, to announce the newest partnership between our two organizations.

As a leader in our industry, it is only natural for us to put forward our facilities, our practices and our vision of inclusion, which is very much in line with Les Elles! Long live our partnership! Welcome to all women! 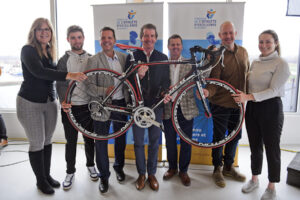 With the outdoor road and gravel bike season well underway, we are proud to have officially launched the 2022 Bonneville 808 Challenge, which will take place on September 16th and 17th! For the occasion, as a first gathering in the lounge of our Beloeil Head Office expansion, we have chosen to invite none other than the best of Quebec’s sports scene!

Among them, our grant holders :

Supported by the Quebec Foundation for Athletic Excellence, these student-athletes, our leaders of tomorrow, are a source of inspiration for us and for all the cyclists who will be on the starting line!

Be part of it: choose and take up your challenge between 70 and 808 km!

It’s official! The Maisons Enfant Soleil designed by Bonneville 2022, Loukian, is open to visitors at our Beloeil Head Office!

We recently had a visit from the Salut Bonjour team who shared images of the house!

Come see it for yourself! We’re waiting for you there!
By your ticket for a chance to win the house by donating $12 to Opération Enfant Soleil! 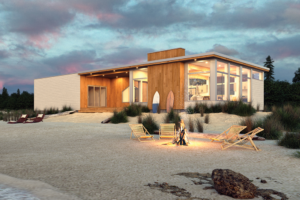 The Natur Series is growing! The physical boundaries between work, leisure and personal life are now erased, we have designed a model reflecting this new reality! The Natur-C house includes spaces where it is good to live, but also to work and recharge!

Inspired by the modern coastal style, this 1,556-square-foot single-storey model features a very large, covered and intimate terrace that allows you to extend your living areas outside and take full advantage of nature while enjoying the view of the exceptional place you have chosen!

The Natur-C will be premiered at the National Home Show, April 15-24, 2022 at the Enercare Centre in Toronto. 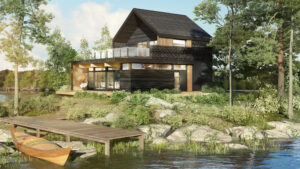 Come meet us at the National Home Show from March 10th to 13th, as well as at the Montreal Home Expo from March 31st to April 3rd!

You will be able to discover the Natur-Evo and its evolving concept!

Get tickets for the National Home Show with the discount code BONNEVILLE and get $5 off!

We are proud to be the official builder for the 8th consecutive year and to support sick children and their families in Quebec!

Get your ticket here!

See you on April 7th for the big live television unveiling.

OPPENING OF INSCRIPTIONS FOR THE BONNEVILLE 808 CHALLENGE - December 21st 2021

The Bonneville 808 Challenge is officially back! On September 16th and 17th, challenge yourself by riding the different courses ranging from 80km to 808km! By registering NOW take advantage of the discounted promo and get your jersey, plus a free bib short!
Registration
https://defi808bonneville.com/inscription/

We are proud to welcome a new member to the Bonneville family: Le Domaine de la Lumière!
This residential project located on 167 acres on the mountain side, in Sainte-Agathe-des-Monts, offers more than 60 private and intimate lots near the Piché and Lumière lakes as well as several walking, biking, snowshoeing and cross-country skiing trails!
Choose on which of them you will install your dream Bonneville home!

PHILANTHROPY: A LOOK BACK TO LACHINE BONNEVILLE HALF MARATHON - October 25th 2021

On October 17th, the 8th edition of the Bonneville Lachine Half Marathon took place and raised over $21,000 for the Alzheimer Society of Montreal! We have been supporting this organization for the past eight years through this event! The event also raised $1,000 for the Mission 1000 tons, $6,500 for the Montreal SPCA and $69,000 for the Sainte-Anne Foundation! With distances ranging from 1km for the younger runners to 21.1km for the most experienced, this race raises awareness among people of all ages and backgrounds about the importance of a healthy lifestyle, pushing your limits, and the joy of giving back! That’s what Bonneville for Life is all about!

We look forward to seeing you for the 9th edition in 2022!

Once again this year, the Bonneville 808 Challenge was a great success, raising $450,000 for the Quebec Foundation for Athletic Excellence!
Here are a few words from our co-president Dany Bonneville, president and founder of the event, who completed 404 km on a gravel bike:
“I am always moved to see so many people challenging themselves, stepping out of their comfort zone, training and adopting healthy lifestyle habits to succeed in crossing the finish line so proud, happy, accomplished and filled with an infectious energy. Also, the Bonneville 808 Challenge, which is becoming increasingly popular with companies, was a great opportunity to solidify team spirit not only between participants of the same company but also, for several teams, to share emotional moments on the different courses. The mutual support, encouragement and complicity between cyclists from different backgrounds were all there and that makes me very happy.”
To read the full article : https://bit.ly/3lP0EjE
See you next year!

Almost $3 million! This is the amount raised by Opération Enfant Soleil (Officiel) thanks to the ticket sale to win the Maison Enfant Soleil designed by Bonneville 2021, Eloise, a new record!
Bonneville for Life is also about supporting sick children in Quebec by being a major player in this second biggest fundraiser for the organization in seven years already and soon eight!
Thank you so much to all ticket holders, partners, and again, congratulations to the grand prize winner, whose name was announced live on Salut Bonjour TV show this morning from our Head Office in Beloeil!

Bonneville for Life is also creating a 12,000 square foot expansion to our Beloeil Headquarters, more than half of which will be dedicated to our employees! This major transformation, which will include sports and relaxation facilities, reflects the importance we place on our team’s well-being! Indeed, employees will be able to enjoy a gym, a lounge area, a rooftop terrace and a relaxation area. What a wonderful way to say thank you to those who have made it possible for us to be here for 60 years!
Grand opening planned for 2022!

We are pleased to welcome a brand new model to our traditional chalet series; the Ste-Agathe. In addition its contemporary look, this cozy property has two bedrooms and one bathroom and is 1040 square feet in size.
It has been added to our inventory of stock homes and is ready for delivery this fall! Book an appointment now!

We were excited to present it to you and you were looking forward to it; discover Éloïse, the Maison Enfant Soleil designed by Bonneville 2021!

Named in honnor of Éloïse, the Enfant Ambassadeur of the project, this charming house has a California essence and natural materials as well as an enveloping and luxurious character! You will fall in love with it as soon as you set foot in it! Visit it in our Beloeil office as early as April!

We are truly proud of that partnership that has been going on for seven years now!

Click here for tickets! The draw will take place on August 26th live on “Salut Bonjour” on TVA!

This morning was the draw for the 6th Maison Enfant Soleil designed by Bonneville, 2020, Jayden!
This magnificent house, which definitely made people dream about it, broke all records in the history of the draw, with almost $2.5 M raised through ticket sales!
We are extremely proud to have contributed to this success and we would like to thank everyone who participated in this little miracle! Thanks to your contribution, like us, you support sick children in Quebec!
Congratulations also to Mr. Éric Tardif, from Charlemagne, the big winner of this prize worth $500,000!

More than $65,000 was distributed today to 25 student-athletes supported by the Quebec Foundation for the Athletic Excellence during the first wave of bursaries awarded following the 4th edition of the Bonneville 808 Challenge!
Indeed, our leaders of tomorrow have received this financial support as they demonstrate great perseverance by continuing to train AND study despite the pandemic!
It was during a virtual meeting bringing together the recipients and their respective sponsors that Dany Bonneville, our Co-President, who is also the founder of the Challenge, spoke to highlight the generosity and commitment of the participants and partners of the event held in September 2020.
HOME